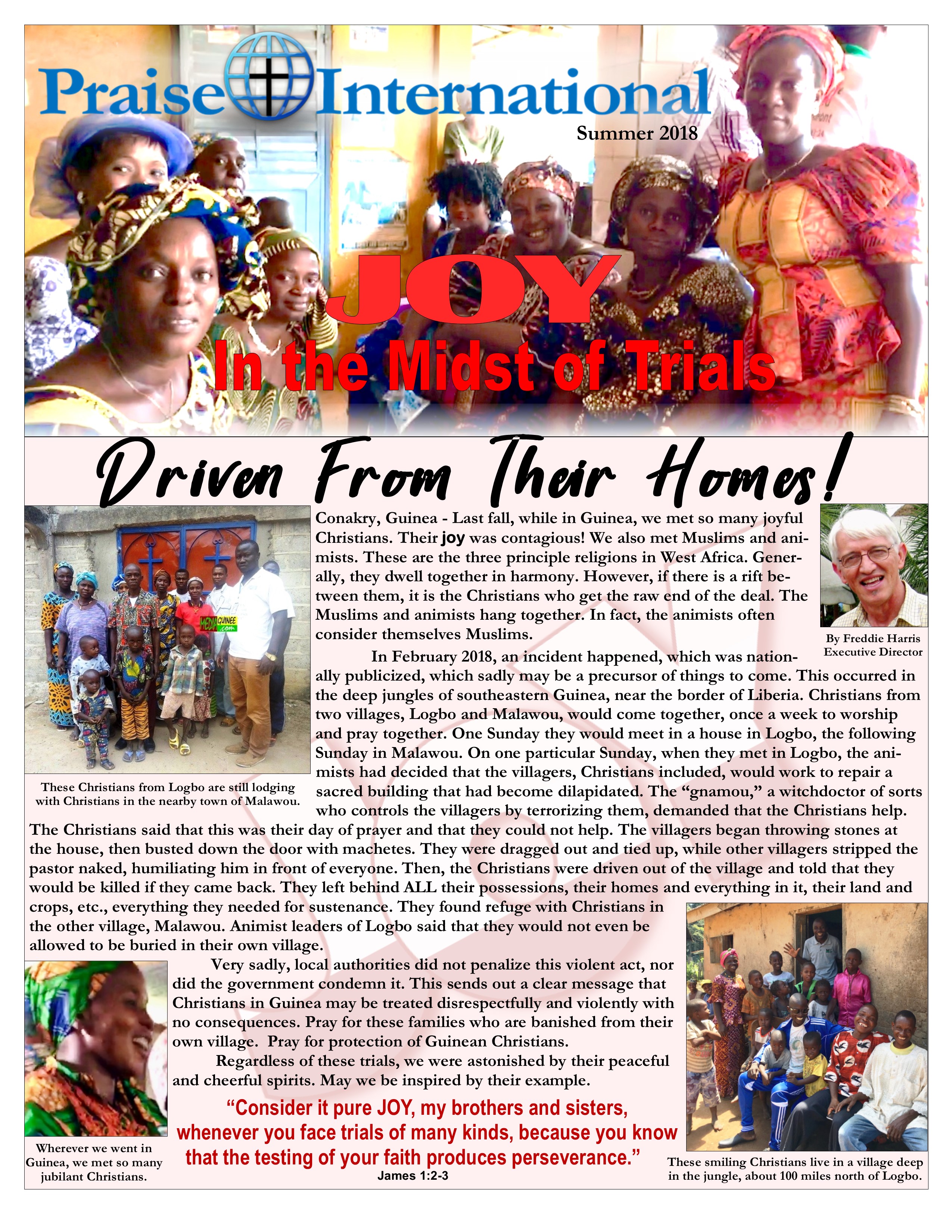 Pastor Christophe Dembele is one of two Praise International Country Leaders in Mali.  He told recently that his biggest praise for last year was the ministry of a medical mission team from Canada.  Mali is a Muslim country, so many of the villages where he works are predominantly Muslim.  This makes it difficult to evangelize.   He has found that the best way to make inroads is through humanitarian efforts.  This approach shows the Mali people that God cares in tangible ways about a person’s social and physical needs.

The ministry of this medical mission team this last Fall was a perfect example.  This was the second or third time that Pastor Christophe hosted a medical mission team.  Each time, God did amazing things!  When the team set up a clinic in the village of Koniobila, not only did most of the people of Koniobila show up, but people from distant villages walked for miles on end in order to take advantage of the team’s free medical work. Hundreds came: mothers brought their little children; tons of youth came be where the action was; sick and elderly people were assisted to the place where several doctors and nurses were offering free medical care.  Even the town chief, village dignitaries and a few Imams came to be part of the excitement, and more importantly to welcome the team and show sincere gratitude for their benevolent service.

Christophe got caught up in the emotions of this, as he stood there, observing the crowd of villagers flocking to their medical clinic.  He told us that he could not help but think about Matthew 9:35-37, where Jesus had been traveling from village to village, teaching and healing the sick. Verse 36 says, “Seeing the people, [Jesus] felt compassion for them, because they were distressed and discouraged like sheep without a shepherd.”

The presence of this crowd was even more surprising, since Christophe knew that it was harvest time and a great deal of people who worked out in the fields had to dropped everything to be there. At the end of their week of medical ministry in Koniobila, Christophe invited the people to a showing of the Jesus film.  The people crowded into this meeting hall! Christophe said that he normally had difficulty getting people into the place of worship.  “I’ve never had such an easy time getting people to attend a church service!”

Christophe reports that quite a bit of villagers accepted the Lord, including a local witchdoctor!  He was a very prominent witch doctor in the village. This witchdoctor wielded great power.  Everybody in the village was terrified by him. He was the one who protected the most sacred idol in the village.  Christophe audaciously confronted this witch doctor.  He told the witchdoctor that he knew the Creator of the wood and mud that formed his idols and that God was much more powerful than any of his idols! God spoke to this witchdoctor’s heart. After he turned to Christ, he and other villagers brought their idols to the center of the village and burned them!

Christophe’s medical team then visited Kifosso, the town where he had grown up.  He says that his home town had always been very hostile to the gospel.  And yet the team again saw God work in very powerful ways.  The local church that hosted their medical team was a large church.  It had had explosive growth. They need to build a bigger church meeting place!  At the time of the team’s arrival, they were in the midst of a huge conflict between the church, the spiritual leaders and the local authorities.  There was so much idol worship in this town. The place where the meeting place was to be built turned out to be an ancient place of idol worship. A heated debate ensued. The presence of the Canadian medical team in Kifosso shook things up. Spiritual strongholds were broken.  God was glorified!  Christophe again showed the Jesus film at the end of the week.  Several hundred attended, even the mayor of the town.  After the film, over 200 people accepted the Lord. The greatest miracle is that the mayor also gave his life to the Lord!  As in Koniobila, people from all over the town brought their idols to be burnt in the town square.

Let’s rejoice with Christophe for God’s mighty work in Mali this last Fall.  He asks prayer for all the new believers, that God would protect them and keep them firm in their new found faith. Pray for Pastor Christophe and also for the protection of other Malian pastors and Christians.

Christophe gave us a special prayer request yesterday.  Two of his Malian pastors recently lost their wives and it happened on the very same day!  Please pray for comfort for each of these bereaved pastors and for their children who no longer have a mother.